31And after that they had mocked him, they took the robe off from him, and put his own raiment on him, and led him away to crucify him.

32And as they came out, they found a man of Cyrene, Simon by name: him they compelled to bear his cross.

33And when they were come unto a place called Golgotha, that is to say, a place of a skull,

Three gospel accounts relate that Simon of Cyrene was recruited by soldiers from the crowd to help carry the cross. At the time, criminals usually carried the crossbar, or patibulum, to a pole, the stipes, which was driven into the ground, though Christian imagery depicts the complete cross.

Calvary, or Golgotha, is described as the hill immediately outside the walls of Jerusalem where Jesus was crucified. The reference to '..a place of a skull.." may indicate the shape of the hill, abandoned bones at a site of public execution, or the presence of a cemetery.

In 325 Helena, mother of the first Christian Roman Emperor, Constantine the Great, traveled to Jerusalem and identified the location of the tomb of Jesus, His  crucifixion site and recovered the True Cross. On the site, Constantine constructed the Church of the Holy Sepulchre, now within the city walls extended by Herod Agrippa, King of Judaea from 41-44 AD.

Traditionally there are 14 pilgrimage sites in Jersulem marking the procession of events from the condemnation of Jesus to Him being laid in the tomb.  Nine sites are along the Via Dolorosa, Way of Sorrows, the final five sites within the Church of the Holy Sepulchre. The route starts near the entrance to the Lion's Gate.

The stations are; Jesus is condemned, carries His cross, falls for first time, meets his mother, Simon carries the cross, Veronica wipes the face of  Jesus, He falls for the second time, meets the women of Jerusalem, falls fror the third time, is stripped of his garments, is nailed to the cross, dies on the cross, is taken down, is laid in the tomb.

Only 8 of these traditional stations have clear scriptural foundation and in 2007 Pope Benedict XVI approved the Scriptural Way of the Cross, more closely aligned with biblical accounts, first introduced by Pope John Paul II in 1991.

The  14 site sequence is; Jesus in the Garden of Gethsemane, betrayed by Judas and arrested, condemned by the Sanhedrin, denied by Peter, judged by Pilate, crowned with thorns, with His cross, assisted by Simon, meeting the women of Jerusalem, crucified, promised his kingdom to the repentant thief, entrusted mary and John to each other, died on the cross, laid in the tomb. 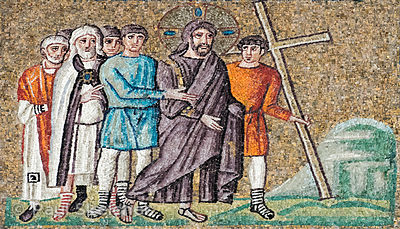