After condemning Jesus for blasphemy against Mosaic law in refusing to deny He was King of the Jews, the Sanhedrin, a Jewish judicial body, brought Him before Pontius Pilate, the Roman governor of Judea, for trial.  Knowing this was unlikely to be a capital offense under Roman law, the Sanhedrin additionally accused him of fomenting resistance to paying taxes to Rome, a capital offense.

Even though Jesus had been critical of tax collectors, Pilate found no reason to find Him deserving of crucifixion, and was surprised that on questioning about being King of the Jews, His response was simply, in Mark 15:2, "Thou sayest it".

In spite of continued accusations by the high priests of the Sanhedrin and the crowd frenzy they encouraged, Pilate was reluctant to pass a sentence of crucifixion. Even his wife spoke on behalf of Jesus. Given the custom of releasing one prisoner at Passover, Pilate asked the crowd to choose between Jesus and Barabbas, a convicted murderer.

After Jewish leaders had convinced Pilate that Jesus represented a threat to Roman occupation, he separates his personal feelings from his official obligation by washing his hands with water in front of the crowd saying, in Matthew, "I am innocent of this man's blood; see you to it.", before condemning Jesus to crucifixion.

Pilate posted the charge against Jesus on His cross stating, "Jesus of Nazareth, The King of the Jews" ignoring protests from the priests that the ambiguous wording seemed to acknowledge His title. 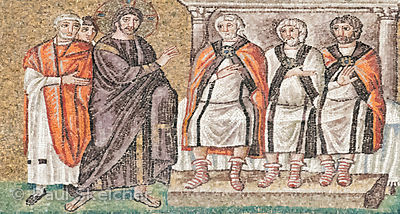